Is Turkey a part of Europe? While this question seems a recent, EU-related issue, it has actually been hotly debated across the continent for ages. Some count the Kemalist reforms of the 1920’s as the birth of the Turkey-Europe issue, others – the siege of Vienna of 1523 or go back as far as the fall of Constantinople in 1453. Some even trace the origins of this issue to the split of the Roman Empire to East and West in the 4th to 6th centuries. The exact answer is that of course Turkey is part of Europe – the UEFA says so as Turkey is a member state. There is of course the question whether Turkey can be counted as a “small country”, but I’ve addressed that in a previous post. And whether Turkey is a part of Europe – I for my part am an engineer and I choose the pragmatic approach. My answer is – who cares, as long as Turkish food continues to be a part of the European menu.

Here’s one of my favourite Turkish recipes – Yumurtali Ispanak (spinach with eggs).

Fry the chopped onion in olive oil until it softens. Add the garlic and fry lightly. Mix the tomato paste in and fry for a couple of minutes while stirring (it removes the sourness). Add the spinach and mix it in a bit. The spinach wilts a lot, so don’t hesitate when you buy a big green bunch of it. When the spinach has wilted a bit, make 4 “pits” in the spinach and break the eggs into them. Cover and simmer until the eggs are cooked. Add black pepper and serve with bulghur or couscous. Afiyet olsun! 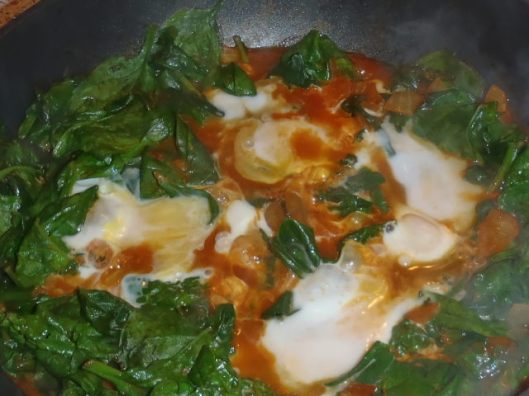