Will Crimea be the last straw for Russia?

By now it is pretty obvious that Russia is taking control over Crimea. The naval base at Sevastopol is essential to the Russian Black Sea Fleet, but is taking control over Crimea and risking a war with Ukraine really the best way to safeguard it? The invasion of Crimea is yet another in a long line of Russian involvements in post-Soviet conflicts. In many cases, these involvements resulted in “frozen conflicts”, leading to the establishment of separatist regions supported by the Russian government – regions like South Ossetia, Abkhazia, Transnistria and Nagorno-Karabakh. Far apart, and each with a different background these regions share one common feature – if it wasn’t for Russian military back-up, they wouldn’t exist in their current pseudo-state form. 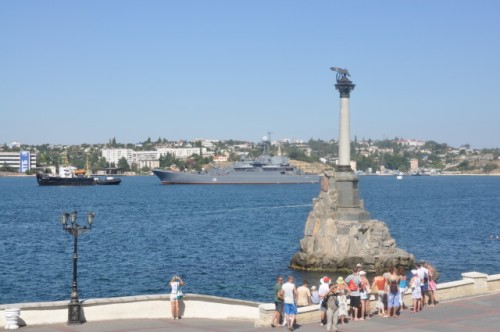 A Russian Navy vessel is being towed out of Sevastopol harbour

Over the years since the break-up of the Soviet Union, Russia has been involved in a growing number of conflicts, mostly in the Caucasus but also in the Balkan, in Tajikistan, and more recently, in Syria. The gas-generated cash flow has fuelled the Russian appetite for rebuilding the Empire. While the Russian army achieved limited successes in the 2008 war with Georgia, the scope and nature of that conflict were very limited. However useful for propaganda purposes, these limited successes blind the Russian leaders and Russia’s population to the real capacities of their armed forces in a serious conflict. The bloody Chechen war has illustrated the shortcomings of the Russian army with brutal accuracy. That conflict still drags on, and Russia keeps losing men, money, strength and face in the Caucasus while achieving nothing.

So what will happen in Crimea? It is unlikely that Russia will fully annex Crimea or that the region will move for full independence. Based on past Russian involvements, the creation of yet another pseudo-state with limited to no international recognition seems the most probable outcome. Unfortunately, that would lead to a lose-lose situation for everyone except a couple of Russian generals.

Crimea’s economy is largely dependent on tourism, and a military invasion is not going to be good for business

Already bankrupt Ukraine will be drawn into a low-intensity civil war and will lose its territorial integrity. The Crimean Peninsula is essentially an island, connected to the mainland only at Perekop, a strip of land only a few kilometres wide. In case of a conflict, the 2 million Crimeans will be cut off from all supplies, and will be dependent on Russia to provide them with all they need via the sea. Russia may have the capacity to block Crimean airports, but it is unlikely that it has the capacity to sustain the population through a blockade. The suffering Crimeans will seek refuge in Russia, adding to the millions of refugees from older conflicts already living in Russia. That’s not the end of Russia’s worries – taking control over Crimea from crippled Ukraine is easy, keeping it might prove a whole different story. The peninsula is populated not only by Russians. Ukrainians are a quarter of the population and another 1/8th are Crimean Tatars, Muslim people with a long record of bad blood with Russia. Anyone thinking that they will accept the de-facto annexation of Crimea by Russia is in for nasty surprises.

Many Crimean Tatars are reduced to a cheap tourist attraction

The Russian economy is already strained to the limit by epidemic corruption, runaway military expenses and lavish spending on luxury projects like hosting the 2014 Winter Olympics and the 2018 FIFA World Cup. All-in-all, it might just be that the burden of a conflict over Crimea with Ukraine, Russia’s biggest European neighbour, will be the last straw for Russia. If you have any investments in Russia – now is the time to start worrying.