Off the beaten path in Vienna

I once wrote a post about the weirdest tourist attractions in Europe. Admittedly, I have a taste for those out-of-line sites. Everywhere I go I try to visits those spots away from the public eye, the obscure and bizarre locations that in my view convene the best “feel” of a place, much better than the well-known, well-tramped tourist traps. As of recently, I am greatly assisted in my quest for the strangest places by Spotted By Locals, a website I contribute to myself, writing about my favourite spots in Rotterdam. On my recent trip to Vienna, thanks to Spotted By Locals, I was able to bag not one, but two quite absurd sites into my collection of “Europe’s weirdest”.

It was a conference of geoscientists. Yes, we’re nerds and are proud of it.

I was in town for a conference, the 2014 EGU meeting to be specific, and since I can’t spend 5 days straight in dark, hot classrooms, especially when its 25 C outside, I took time off to explore Vienna. Honestly, I wasn’t expecting much. I mean, what’s up with Vienna? On the surface, its a big city, a major European capital with a lot of history and it is supposed to have all it takes to be a coveted destination. But Vienna just doesn’t arouse, fails to excite. You rarely come across bloggers putting Vienna on their must-go list, do you? It has a reason – while Paris is “city of love”, Amsterdam the “city of sin”, Berlin has the whole anarchist vibe going on and London is… well, just London, but what is Vienna? The “city of opera”? Not really the crowd magnet, isn’t it? Actually, Vienna does attract a lot of tourists, but its mostly middle-aged Americans doing fiaker tours and looking utterly ridiculous while at it. Not the backpacker city by any rate.

As I was about to discover, underneath the classy polish, Vienna does have a lot to offer, but its charms are to be found outside the city centre, which is crowded with Russian tourists and impossibly expensive souvenir stores. After an early morning session at the EGU, I took the subway to town for a brief escape to the courtyards of the university. The shaded patios were an excellent shelter from the passionately bright sun and a welcome opportunity to stretch one’s legs. But the best thing was that turning around the corner I bumped into the Narrenturm. Better still – I happened to be there on Wednesday, during its very limited opening hours! 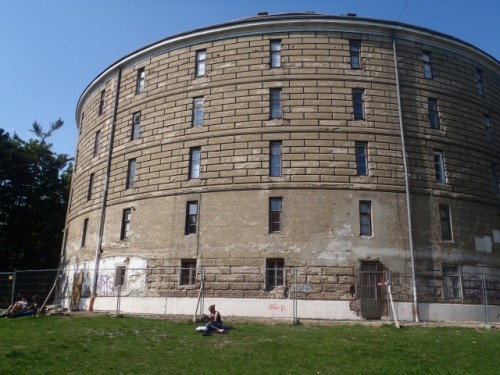 The Narrenturm was probably not the happiest place to be in

Built in 1784, the Narrenturm is the first psychiatric hospital in the world. Inside is a museum, dedicated to medical pathologies and its as creepy as can be. The collection is full of the disgusting, the abnormal, the obnoxious cases of everything that can go wrong with a human body. Staffed by medicine students in once-white robes, the completely outdated setup and dusty exhibition are absolutely perfect and I hope they won’t change a thing. Its like walking into a freak-show. The museum-shop sells appropriate souvenirs. I stopped short of getting my daughter a cuddly syphilis doll – I got the amoeba instead.

The next day was a bit cooler and with a slight breeze – ideal for cycling! I rented a bicycle via Vienna’s Citybike scheme and off I was. I had just the right destination reserved for this day – Friedhof der Namenlosen. At this cheery spot the nameless dead people who drowned in the Danube were buried for a 100 years. Since it’s located in an industrial area on the outskirts of Vienna, I expected to find a desolated, deserted spot, and I was absolutely wrong. Of course, first I had to get there. The route was a classic example of the road being at least as important as the goal but I’ll let the photo’s speak for themselves. 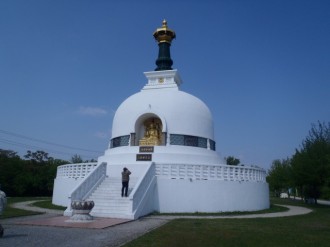 Yep, its a Buddhist stupa on the Donau

A selfie on a hydraulic power dam

Beaver-felled tree on the Donauinsel

Crowds celebrating 1st of May 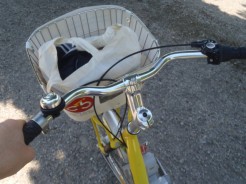 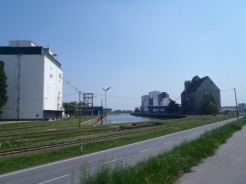 When I finally reached the day’s destination, to my big surprise I found a guesthouse annex cafe, named after the Friedhof der Namenlosen, and it was quite busy. I completely forgot that it was the 1st of May, which is a big holiday in Austria (and is completely ignored in the Netherlands), so Tout-Vienna was out there, recreating. In fact, having seen the masses everywhere else later that day, I think the Friedhof was probably the most subdued place in all the city after all. The place itself is not what you’d call “spectacular”, and most graves actually have names on them (I guess the victims were identified afterwards). But if you’re in Vienna and looking for a different kind of connection to the city’s history, visiting this site is a unique experience.

I’m not inventing this – its actually called after the cemetery

So I did enjoy Vienna after all. Perhaps it just needs a bit of an effort and some time to adjust to the leisurely style and pace of the city. And of course being blessed with wonderful spring weather and great insider tips helps a lot, too. I guess what I’m trying to say is – when travelling, take the time, and appreciate good advice. But mostly – don’t be afraid to step off the beaten path.

The Highlander brewery is a delightful spot away from the crowds

2 responses to “Off the beaten path in Vienna”