At the centre of Europe

Numerous attempts were made to define the geographical centre of Europe. The difficulty in agreeing on the “centre” is due to the unclear definition of Europe – the Eastern boundary is simply arbitrary. Other questions are whether islands are to be included or just the mainland. As one can expect, the EU has its own “midpoint”, the location of which is also not undisputed. But if you want to know more about this, just read the Wikipedia page about the topic.

The political centre of Europe is a completely different story. Brussels is often described as the political centre, since many European institutions are located there. However, the European parliament divides its time between Brussels and Strasbourg, the European Central Bank has its headquarters in Frankfurt, Europol is in the Hague, Frontex is in Warsaw – I guess its clear what I mean. Or not, but its Europe, so get used to it.

I propose a different view on the “centre of Europe”, a more statistical one. Where is the centre of a country? In its capital, naturally. Europe does not have a capital, despite all attempts to create one (previous contenders include Paris, Berlin, Rome and Moscow). Therefore, I looked up the location of the capitals of European countries, and calculated the median and mean of their latitude and longitudes. The median and mean are both close to where the borders of Austria, Germany and the Czech Republic meet. 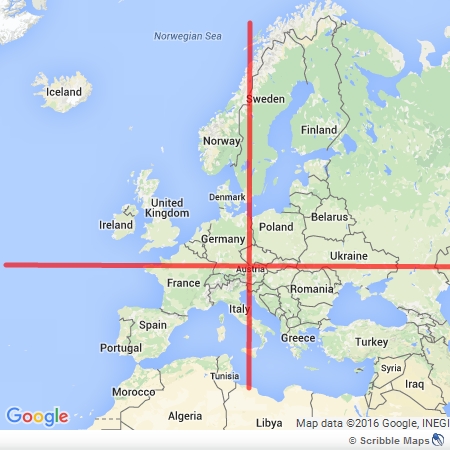 The exact location depends on what counts as “European country”, but will not shift by much. Personally, I find this location quite fitting my expectations of the centre of Europe. It also simplifies the definitions of Eastern, Northern, Western and Southern Europe. This definition will not satisfy everyone, but at least it’s obvious that the centre of Europe is not in Brussels. Ain’t that a relief.

One response to “At the centre of Europe”