Today is the Bike to Work Day in the Netherlands. It may not come as a surprise to you that a lot of people in the Netherlands cycle to work. But have you wondered why? Pro-cycling attitude of employers is no small part of the reason for the high percentages of Dutch cycling commuters. I am fortunate enough to work for Sweco, a company that goes the extra mile in promoting cycling to work.

There are, of course, the usual things (for the Dutch, at least). Proper bicycle sheds, showers and lockers at our offices, tax-free bicycle financing scheme, access to the OV-fiets (the Dutch Railways shared bicycles) are all pretty much standard at Dutch companies. If an employee purchases a new bike, Sweco is also paying for the bicycle insurance and extra’s such as rain gear.

But here’s the extra mile – at Sweco we get paid to cycle. Yes, that’s right – I get money for cycling. The kilometers I cycle are refunded just as car kilometers are, so that even my modest commute of less than 5 km earns me almost 2 Euro each day. It won’t make me rich, but its more than enough to pay for the purchase and maintenance of my bike. Business kilometers pay even more, so that choosing for the bicycle to go to a customer actually pays.

I cycle to work because its fun. Working at Sweco, a bike-friendly company, makes it even easier to cycle to work. I hope more employers around the world will follow Sweco’s example – making the world an easier place to cycle, one bicycle ride at a time.

Cycling is Tel-O-Fun in Tel Aviv

Tel Aviv’s compact layout, flat geography, mild climate and young population all combine to create a city that was destined to become a cycling hub. Cycling in Tel Aviv is fun, and nowadays it not just fun but also easy thanks to Tel-O-Fun, the city’s public bicycle program. The project was scheduled to be launched in 2008, but was delayed until the Israeli helmet law was amended in 2011. Once the mandatory helmet age was curbed to 18, Tel Aviv immediately launched the long-awaited Tel-O-Fun, and ignited a true cycling revolution. Bicycle rental stations popped up all around the city, and in a fortnight, the bicycle became a real alternative to the car in Tel Aviv. 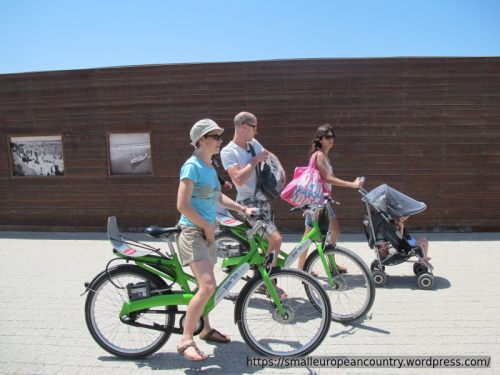 In my Rotterdam city report, written for Tales from a Small Planet, I raved about how cycling here in Rotterdam is so amazing. Well, now I have written another report about Rotterdam – specifically dedicated to cycling here.

In 2015, Rotterdam, the second-largest city (630.000 inhabitants) of the Netherlands, has finally stepped out of the shadow of the Dutch capital as a tourist destination in its own right. And now it quickly gains world fame as a cycling city. For those unfamiliar with the Netherlands, it is difficult to realise how much cycling is a part of life here. Writing about Dutch cycling culture is like trying to write about the pubs of Dublin, or the café culture of Paris – a mission (almost) impossible. The sheer volume of cycling in Rotterdam is staggering. 80% of people own a bicycle, 160.000 (25%) Rotterdammers cycle daily, and another 200.000 (32%) cycle on a weekly basis. Every day, 560.000 cycle trips are made in Rotterdam and bicycle use has increased by 60% over the past decade.

Read more about cycling in Rotterdam at the Bike Citizens Magazine – www.bikecitizens.net/cycling-in-rotterdam/.

Most recent cycling innovation in Rotterdam are the free children buggies, that are available at the guarded bicycle parkings in the city centre.