The surgeon of Easter Island 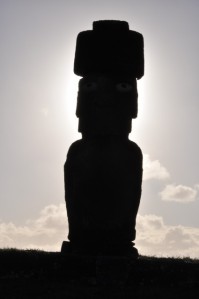 Easter Island statues are called Moai. This one is very close to the village.

“The local hospital is definitely not one of the highlights of Easter Island. Do whatever you can to avoid getting there”. The guide book left no room for interpretation. However, I had very little choice. As a reminder of the pearl farming adventure I carried with me not only a few black pearls, but also a nasty infection in my foot. By the time we arrived at Easter Island, my foot was swollen and dotted with ugly looking pits, where bacteria were developing a rather advanced civilization. And so, upon landing on the most remote airport in the world, our primary criterion in choosing a guest house was its proximity to the local hospital. 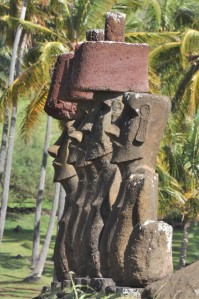 The stone platforms upon which the statues stand are called Ahu. This is Ahu Anakena.

Having limped to the hospital, my Spanish was sufficient to explain to the receptionist that “tengo una problema con mi pie”. Her gesture towards the waiting line was sufficient and I collapsed onto a chair between an elderly farmer and his wife, who were obviously planning to pay for the visit with a chicken or perhaps a goat’s hind. Soon my foot was being examined by a young lieutenant in a white uniform under his doctor’s coat (like most of the island, the hospital was being run by the Chilean Navy). He didn’t like what he saw, and the older nurse accompanying him liked it even less. I for my part totally disliked them not liking my foot. I mean, I wasn’t happy with it either, but their faces were rather unoptimistic, not the expression you want to see on the medical staff treating you. After a brief discussion among them the lieutenant told me in perfect English that I had a serious infection and that it was best if Doctor Jorge had a look at it. 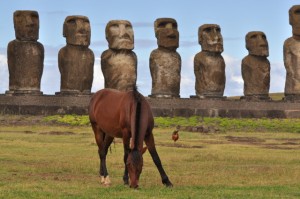 Half-wild horses are everywhere on Easter Island. There are more than 5000 of them here.

I never learned Doctor Jorge’s last name, but it was probably Authority. If ever there was a prototype for a Doctor (yes, with a capital letter) for a Latin soap-opera, he just entered the room. Doctor Jorge was stoutly built, in his mid-50’s, with a solid moustache and with an infinite supply of confidence. Fortunately for me, in his case confidence was justified as he was obviously very experienced and, having worked in an American hospital for decades, well trained for his job (as he so humbly mentioned). Which was probably a very good thing, as he was the only surgeon within 3500 km radius (again, he told us so himself). Having examined my leg, Doctor Jorge pronounced that I will live, that my leg will be OK, that my infection was serious but treatable and that I should not be worried but that I nevertheless must return the next day for inspection. Thus spoken, Doctor Jorge shook my hand and left, carrying with him the young lieutenant and the admiring looks of the nurses, not forgetting to kiss my wife goodbye (on both cheeks). She later confessed that no doctor has ever said goodbye to her in this way, but with Doctor Jorge it seemed the most natural way to do it. 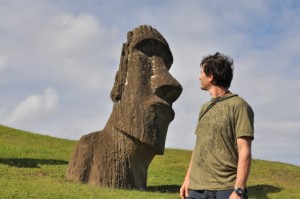 Hundreds of statues remain in the quarry, in various stages of completeness.

I was left in the hands of a uniformed medic who told me that he would do “limpiar”. My blank gaze required an explanation, so he made sweeping moves, supplemented by “whoosh whoosh” noises, until I finally understood that he was going to clean my wounds. By that time, the lieutenant returned, having received further instructions from Doctor Jorge. The two of them efficiently injected me with a painkiller and an antibiotic and cleaned and bandaged my foot, which was rather painful despite the painkiller. 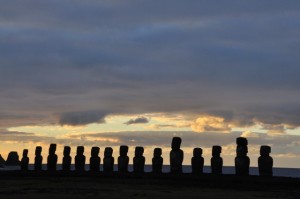 Afterwards, I was sent off to the pharmacy with a recipe for a course of antibiotics. That being Easter Island, the pharmacy didn’t have the said antibiotics. Asked when they expect to have them, the pharmacists shrugged and asked “when’s the next plane?”. Since we’ve arrived the day before and there are only two planes a week, I’d have to wait at least 3 days, by which time we were leaving anyway. Back to Doctor Jorge we went. This time, we didn’t have to wait amongst the elderly farmers. Having heard that we need to see Doctor Jorge, the receptionist took us directly to the man himself. Undaunted (and unsurprised) by the lack of medications in the pharmacy, Doctor Jorge prescribed an alternative and sent us on our way, this time without the kisses. 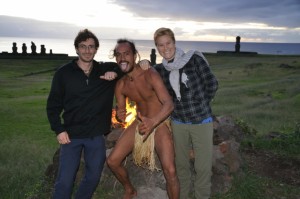 The Rapa Nui are the native Polynesian inhabitants of Easter Island

From here on, there is not much to tell. My foot got better, and the little scars left by the eradicated bacterial civilization are almost completely gone. But every now and then, when I look at my left foot, I remember Doctor Jorge, the surgeon of Easter Island.

P. S. Next to the barracks that house the hospital, they were working on what looked like a spacious, modern building for a new facility. I hope by now Doctor Jorge got the hospital he deserves.

Easter Island – 3500 kilometers to the next surgeon

Be James Bond, take the train

On short commutes I prefer the bicycle. And when going to a place far-far away flying is often the only option. But on the short distances between and inside small European countries train is my favourite mode of transport be it for a weekend getaway or on business travel. European trains get their fair share of bad publicity, especially in winter times. While this criticism is often justified, I would like to take a moment and focus on the positive sides of train travel when compared to car or plane. 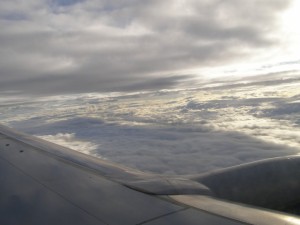 Flight view – more of the same

Let’s start with train vs plane. Unlike on a plane, in a train you have Space. There’s space for your legs, space for your luggage, space in the toilet and space to walk around and stretch your legs. On many trains there’s even a special place to go to for lunch, dinner or a drink. And in that space, called restaurant car, they give you an actual meal on real plates with proper knives and forks, a meal that doesn’t taste like cardboard (low pressure and dry air in pressurized planes makes everything taste like cardboard). Further on the train’s plus side – when you take the train you don’t have to show up 2 hours in advance, and you don’t have to take off your shoes before boarding. On a train you can take all your drinks or camping gas tanks and pocket knives with you (for a hiker like myself its a real issue!). Also, when you take the train, you actually arrive directly at your destination. At least, I do, because my destinations tend to be in city centres rather than in airports. When you’re flying, on the contrary, you arrive at the airport and (ironically) have to take a train into the city, a train that is often more expensive and takes longer than the flight. Finally, there’s the view. The view from a plane sucks. In Europe, most of the time the view is just clouds. Even when there are no clouds, after a couple of flights all tiny villages below look the same. And you have to bend your neck in a weird angle to try and catch a glimpse of the tiny villages and clouds through that damp small window 3 seat rows away, because window seats cost extra. I, on the other hand, am at this very moment sitting next to a window bigger than the one in my living room, passing the Dom of Cologne and castles above the Rhine. I see new people coming and going as the train goes from city to city, I wave to those staying behind at the stations, in other words, I am travelling. On a plane, I’m just bored. Enough on the plane though, you get the point by now, let’s talk about the car.

In some aspects, the car offers the same advantages as the train when compared to the plane – the view, the luggage, the space (unless you have a small European car, like mine). The car has a couple of nasty drawbacks though. The car is your responsibility. It’s an asset as much as it is a liability. You are the person who actually has to drive it. Which means that you can’t spend the time you’re on the road reading, writing, sleeping or watching a movie – all of which you can do on the train. Or have a few beers while travelling. Well, OK, you can, but please don’t. The real problem with the car, though, starts when you arrive. Yes, the car, like the train, can take you to the city centre.

While the train takes care of itself, the car doesn’t – it has to be parked. Perhaps not a problem in a big country like Australia or Canada, but rather a big issue in European cities. Space, hence parking, is scarce and expensive. And once parked, your car, especially if it’s a rental or has foreign license plates, is a thief magnet. Bummer. I could drive all the way to Vienna or Milan. I’d much rather take the night train ,dine with a couple of wine glasses, sleep on board in a bed (not a plane chair),have my morning coffee with croissant and step out fresh and crispy onto the platform and into the morning sun.

Rail away! Wild Balkan scenery on the Belgrado-Bar route

Speaking of night trains – here comes the bombshell. The biggest advantage of a train over a plane or a car is sex. Sure, you can squeeze into the tiny toilet on a plane to join the mile high club, or have some back seat action (again, not if you have a small European car), but that’s not really classy, is it? On the other hand, on an increasing number of European train destination just a minor upgrade will get you a private coupe all for yourself and your darling, so that you can feel like James Bond (or Daniela Bianci) on the Oriental Express. Just don’t forget to order the breakfast in bed for a complete experience and I dare you to show me the car or plane that can beat that!