Leaving Austria – a tale of a lucky hitchhike

Way back in 2008, when I was a penniless student, I was finishing my semester in Zurich when I got a call from Kristian (who already featured in an earlier post about London). He asked if he could come visit me in Zurich and whether I’d be interested in a little side trip together. Needless to say I was.

You might recall that in 2008 the European football championship was played in Switzerland and Austria. Not that we had tickets but since we were around, we were planning on enjoying the sphere. By the time Kristian joined me in Zurich the semifinals were being played. After spending a couple of days in Zurich I’ve done the last arrangements, packed the rest of my gear and off we went to Vienna on a most spectacular 8-hour train journey through the Alps, to experience the city during the final match between Spain and Germany. 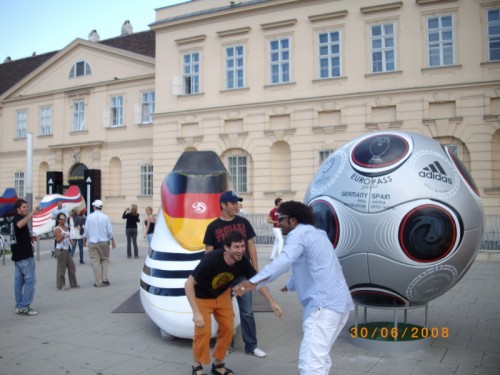 The closest we got to the actual match

In Vienna we, much appropriately for two poor students, arranged a place via Couchsurfing with a lovely local couple who were binging on couch surfers, so the house was swarming with guests. A couple of days partying at crazy birthdays, a bit of mischief in the local museums and pestering the losing Germans flew by and it was really time to get back to our base at the Netherlands. Have I mentioned we were poor? We could however afford to spend a bit more time on the journey back and were both in an adventurous mood so we decided to hitchhike. Getting out of Vienna and onto the highway proved in hindsight the most treacherous part of the trip. We probably should have started hitchhiking on the closest petrol station in town. Instead we took the metro to a place near the highway and spent a half an hour searching our way through the fields in an effort to get to the highway petrol station and really start the journey home. 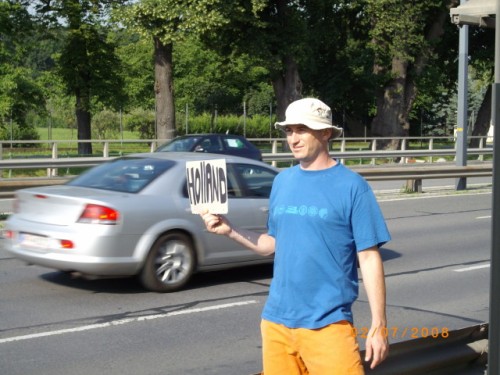 Needless to say, this is not how we were hitchhiking – this is just for the show.

We’ve had an early start, which was a very good thing. It was July and it turned out to be one of the hottest days of the year. By the time we were in position, it was almost nine and already quite hot. Within a mere half an hour I approached a Saab with Dutch number plates and struck a conversation. The guy was friendly enough to offer us a ride but at he explained in the car, he was only going as far as Passau, at the Austrian-German border. He was after all already driving for a while – he was working in some import-export firm in the Netherlands and they’ve had a misunderstanding with Austrian customer. Having failed to clear the misunderstanding over the phone the previous day, he jumped into his car after working hours, drove all the way to Vienna, was there at 7, had a meeting until 9, and was now on his way back to Eindhoven. He was (before he met us) realistic and planned to stop at Passau to get some sleep.

We quickly realized it was a golden opportunity. And we did our best to keep our luck awake, pouring coffee into him at every stop and keeping him entertained by small talk. Passau was passed, then Nuremberg, then Würzburg, and we were still driving. The dude was, in fact, also anxious to get home. It was the last day of school, and his eldest child was graduating from primary school (can you graduate from primary school?). The traditional school play was set due in the evening and he reckoned he could be there at least for the second act. Naturally, we encouraged the idea and as the hours went by we were pretty certain we’d get there.

The Saab clicked through the kilometres, and thank God it was a Saab – the comfy seats, the powerful airco and the reliable engine really got us through the day. By noon it was 38 degrees and the asphalt was melting. Every pit stop we made meant spending as little time as possible out of the car, as even a couple of minutes in the relentless sun would give you a heat stroke. The evening rush hour was rather brutal on less reliable cars, and dozens of overheated car lined the sides of the Autobahn.

As we were coming to the Dutch border, massive storm clouds were gathering as common in Europe on such overheated days. Just as we passed Venlo, all hell broke loose in some of the biggest thunderstorms I have ever seen. We blessed ourselves again with our ride, as the news on the radio mentioned countless train routes out of order due to lightning strikes. From Eindhoven it was quite simple – the storm has passed, cooling down the intense heat, and we had an otherwise uneventful train journey back to Delft. And there we were – having hitchhiked in a single day and with a single lucky ride a whooping 1100 kilometres! And if that’s not a promo piece of the joys of hitchhiking, I don’t know what is. 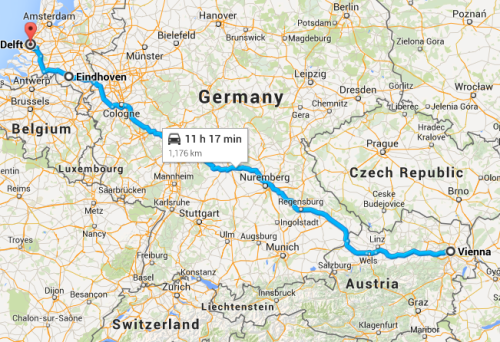 Filed under Europe on a budget

Caucasus – a spicy bite of adventure

I have to admit – the last time I’ve been to the Caucasus was more than 30 years ago. I was 3 years old and I’ve spent a summer with my family on a bee farm in Dagestan, or so they tell me. I have very limited recollection of the events myself. Nevertheless, the countries that now compose the Caucasus – Russia, Armenia, Georgia and Azerbaijan (and the multitude of semi-countries like South-Ossetia or Nagorno-Karabakh) were part of the Soviet Union, so technically, I once lived in a “Caucasus country”. The region has been at the top of my wish list for a while, so I’ve gathered sufficient knowledge to write about it (*).

The old city of Baku, Azerbaijan (image by Urek Meniashvili)

The Etchmiadzin Cathedral in Armenia (http://www.panoramio.com/user/96132)

Yerevan, the capital of Armenia, with Mount Ararat in the backdrop (image by Serouj Ourishian)

(*) – All images used in this post are from Wikipedia. I’ve done my best to credit the photographers, to all of whom I with to experience my gratitude for providing such beautiful images.

Europe as a budget destination – part III – how to get around?

An essential part of travel is… the actual travelling. Unless you’re on a city-trip, at some point you probably want to get from A to B. Admitted, some routes are more spectucalr than others, and not all ways of transport are equally pleasant. But getting around can be part of the joy of travelling, and even in Europe it doesn’t have to be expensive.

Filed under Europe, Europe on a budget, Tips and tricks, Travel