New Zealand – to Doom or not to Doom? 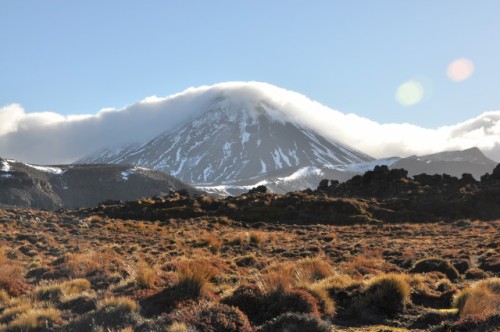 The young couple is ecstatic. They’ve just reached a landmark in their lives and want to share it with everyone in the hostel. They shout in joy: “We did it, we’ve climbed Mount Doom!”. They sing songs of the Shire and dance around the tables. It almost breaks my heart, but someone must do it. Now, while they still have the chance to get things right. I have to tell them. 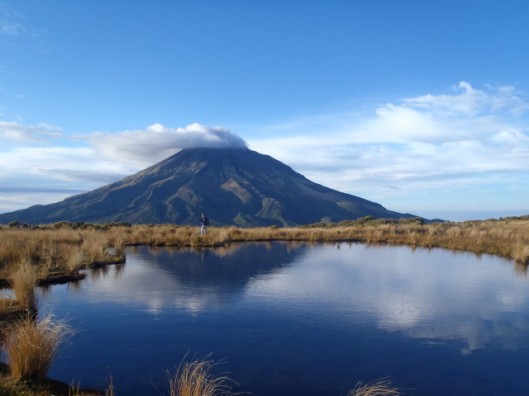 -I’m sorry, really sorry to break your party, but you didn’t climb Mount Doom today.
-What do you mean we didn’t? We’ve been there, today, you’ve seen us at the top!
-Well, yes, at the top of Mount Taranaki. It’s a mountain, it’s a volcano, it’s event the same type as Mount Doom – a stratovolcano, but it’s not Mount Doom.

Us at the top of Mount Taranaki

They just stare in disbelief. So sad to see them like this, but I really hope they have a few days left in New Zealand and can still climb Mount Ngauruhoe, which “played” Mount Doom in the movie. Actually, Mount Taranaki “played” Mount Fuji in The Last Samurai, but I doubt that will cheer them up. I do my best to encourage them: 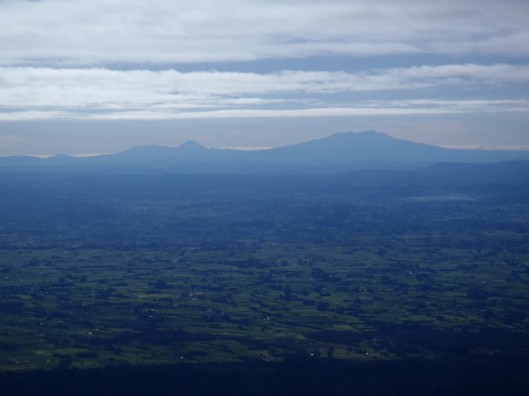 The 360 degrees view from the top of Mount Taranaki is astonishing. Mount Ngauruhoe is the pointy cone in the middle, the big one on the right is Mount Ruapehu

It’s the only thing they can say. Nobody’s laughing. Everybody in the hostel’s living room understands the frustration of a Tolkien fan who just thought he’s reached another landmark of his quest. Making silly remarks is the last thing on everyone’s mind. I offer them a piece of my apple pie for consolation but the young couple politely refuses. They retreat to their room, to recover their losses and plan the conquest of Mount Doom. Again. I hope they made it. We did. 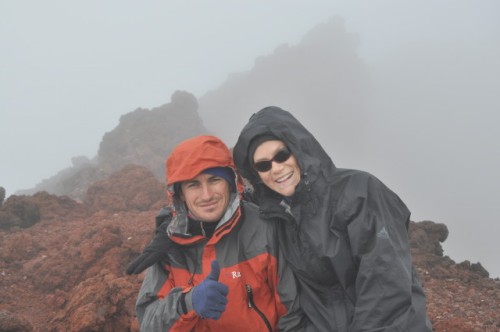 Us at the top of Mount Ngauruhoe a.k.a. Mount Doom

Be James Bond, take the train

On short commutes I prefer the bicycle. And when going to a place far-far away flying is often the only option. But on the short distances between and inside small European countries train is my favourite mode of transport be it for a weekend getaway or on business travel. European trains get their fair share of bad publicity, especially in winter times. While this criticism is often justified, I would like to take a moment and focus on the positive sides of train travel when compared to car or plane.

Flight view – more of the same

Let’s start with train vs plane. Unlike on a plane, in a train you have Space. There’s space for your legs, space for your luggage, space in the toilet and space to walk around and stretch your legs. On many trains there’s even a special place to go to for lunch, dinner or a drink. And in that space, called restaurant car, they give you an actual meal on real plates with proper knives and forks, a meal that doesn’t taste like cardboard (low pressure and dry air in pressurized planes makes everything taste like cardboard). Further on the train’s plus side – when you take the train you don’t have to show up 2 hours in advance, and you don’t have to take off your shoes before boarding. On a train you can take all your drinks or camping gas tanks and pocket knives with you (for a hiker like myself its a real issue!). Also, when you take the train, you actually arrive directly at your destination. At least, I do, because my destinations tend to be in city centres rather than in airports. When you’re flying, on the contrary, you arrive at the airport and (ironically) have to take a train into the city, a train that is often more expensive and takes longer than the flight. Finally, there’s the view. The view from a plane sucks. In Europe, most of the time the view is just clouds. Even when there are no clouds, after a couple of flights all tiny villages below look the same. And you have to bend your neck in a weird angle to try and catch a glimpse of the tiny villages and clouds through that damp small window 3 seat rows away, because window seats cost extra. I, on the other hand, am at this very moment sitting next to a window bigger than the one in my living room, passing the Dom of Cologne and castles above the Rhine. I see new people coming and going as the train goes from city to city, I wave to those staying behind at the stations, in other words, I am travelling. On a plane, I’m just bored. Enough on the plane though, you get the point by now, let’s talk about the car.

In some aspects, the car offers the same advantages as the train when compared to the plane – the view, the luggage, the space (unless you have a small European car, like mine). The car has a couple of nasty drawbacks though. The car is your responsibility. It’s an asset as much as it is a liability. You are the person who actually has to drive it. Which means that you can’t spend the time you’re on the road reading, writing, sleeping or watching a movie – all of which you can do on the train. Or have a few beers while travelling. Well, OK, you can, but please don’t. The real problem with the car, though, starts when you arrive. Yes, the car, like the train, can take you to the city centre. 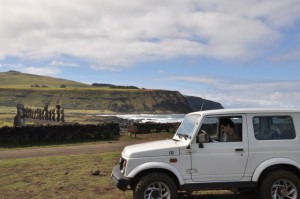 While the train takes care of itself, the car doesn’t – it has to be parked. Perhaps not a problem in a big country like Australia or Canada, but rather a big issue in European cities. Space, hence parking, is scarce and expensive. And once parked, your car, especially if it’s a rental or has foreign license plates, is a thief magnet. Bummer. I could drive all the way to Vienna or Milan. I’d much rather take the night train ,dine with a couple of wine glasses, sleep on board in a bed (not a plane chair),have my morning coffee with croissant and step out fresh and crispy onto the platform and into the morning sun. 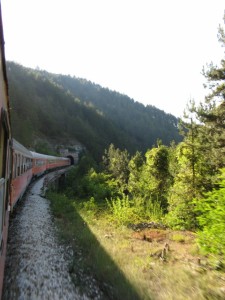 Rail away! Wild Balkan scenery on the Belgrado-Bar route

Speaking of night trains – here comes the bombshell. The biggest advantage of a train over a plane or a car is sex. Sure, you can squeeze into the tiny toilet on a plane to join the mile high club, or have some back seat action (again, not if you have a small European car), but that’s not really classy, is it? On the other hand, on an increasing number of European train destination just a minor upgrade will get you a private coupe all for yourself and your darling, so that you can feel like James Bond (or Daniela Bianci) on the Oriental Express. Just don’t forget to order the breakfast in bed for a complete experience and I dare you to show me the car or plane that can beat that!

Pulau Ubin – Singapore as it once was

Travelling is about meeting the unexpected. At least, when you do it right, it is. And about keeping your eyes and ears open for opportunities. And giving yourself credit for doing it, which is what I am about to do. 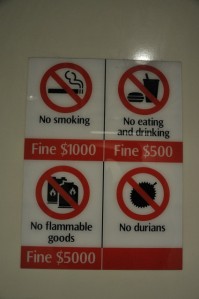 Welcome to Singapore and have a nice fine

As we were hiking to the Annapurna base camp, I’ve spotted a billboard in Chomrong, reproducing an article in The Times that was promoting the joys of a break at a certain cafe on the next hilltop. The article was absolutely right – the cafe was spotlessly clean, the service friendly, the views unrivalled and the break mostly welcome after the long climb. But as I am addicted to reading whatever printed text I lay my eyes on, I’ve read the whole article, which was about enjoying relaxed spots in faraway places. One of the places mentioned was Pulau Ubin, a small island offshore Singapore. Singapore is of course offshore itself, but in addition to the main island the city-state is comprised of dozens of smaller ones, some unihnabited, others, like Sentosa, resembling Disneyland. Pulau Ubin was praised by The Times as an opportunity to experience Singapore as it once was.

We’ve spent a few days in Singapore as a pleasant acclimatization step between the turbulent Asia and the Westernized New Zealand. On the last day with a few hours to spare before our flight, we decided to give Pulau Ubin a shot. Pulau Ubin is relatively close to the famous Singapore airport, but the feel of it couldn’t have been more distant. Getting there was not a trivial affair, invlovling train, bus and boat, fortunately all perfectly connected. The progressive means of transport were moving further and further away from the high-tech image of Singapore, culminating with the rather squeaky ferry boat with space for no less than 12 passengers. All it lacked was a pair of chicken and a pig on board and you’d never know that you’re in one of the richest countries on earth and not in a remote corner of Sichuan province.

The chicken and pigs were all present at Pulau Ubin, and The Times was right on the money again – if you want to know what Singapore was like before it got rich – go to Pulau Ubin. Bicycle is the number 1 transport on the island, and renting one is totally worth it – Pulau Ubin is small, but still big enough to get tired if you’re walking. There’s little if any traffic on the local dirt roads and the slopes are very moderate, accessible to even the most inexperienced cyclist. But the best thing about Pulau Ubin is the wildlife. Yes, there’s wildlife in Singapore, outside the superb Singapore Zoo and the wonderful Jurong Bird Park. On Pulau Ubin there are wild pigs, kingfishers, weird crawling fish and even beautiful monitor lizards are running around, in perfectly natural setting, without any fences or nets. There are also a couple of fishermen villages that supposedly serve great seafood but it was really time for us to go. We finished our Asian adventures in style – chilling in the rooftop swimming pool in the airport before the long flight to New Zealand.

I liked Singapore a lot – the food, the friendly people, the shopping walhalla, the variety of temples, the amusement parks and the excellent museums. And I am also very happy I’ve stopped on that path in Chomrong to read the whole billboard – thanks to it I’ve seen the quiet side of Singapore in Pulau Ubin. Tourists usually spend just a few hours or a day in Singapore in between flights and many never leave Changi airport, which is rightfully famous for its excellent facilities. I promise you, though, that there’s more to Singapore than just the airport. Should you be in the area, I would suggest to take a few days to get a full taste of what this suprisingly diverse tiny country has to offer. If you’re really just passing by, and you would like to have a different, laid-back kind of a Singapore stopover – a trip to Pulau Ubin might be just the thing for you.