During my PhD project I sometimes venture into the field to gather soil samples. For the sampling I am dependent on other people and their schedules (I’ll tell more about the details some other time). So far, the sampling seems to be destined to occur in the most inconvenient weather. Last time it was raining cats and dogs, and today… well, let’s say I am having difficulties finding my car. Fortunately, its a small European car, so I don’t have a lot of digging to do. 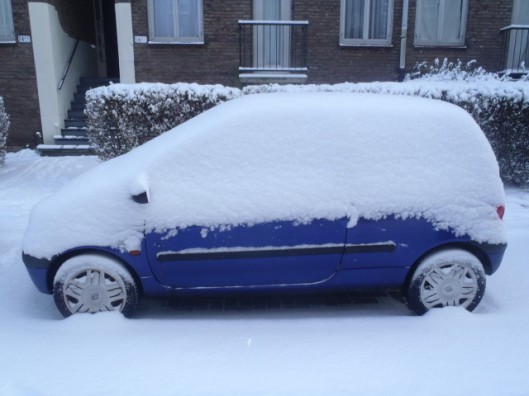 When its minus 10 outside, you’re happy to own a Twingo

The Dutch winter sometimes can be real fun, a proper winter, like last year. Most of the time though, between December and March the weather is, how should I put it… the opposite of pleasant. Temperatures fluctuate around the zero, the moist wind is blowing through whatever you wear and some unidentified mixture is falling out of the sky instead of proper snow.

Actually, this is what I want to discuss. While the Dutch have many words for urban waterways, they have surprisingly limited vocabulary describing forms of precipitation. Which I find strange, considering the variety of stuff that falls down on you most of the year. The local weather forecast recognizes rain, snow and hail, but the rest of it is just lumped together as “wintry showers”. And while the English language is able to distinguish varieties in the wintry showers such as graupel (even though its a German word) or sleet, the Dutch language largely ignores the topic. Which is even more surprising considering how much the Dutch talk about the weather.

Every year the Word of the Year is chosen, and every year the Dutch turn the election into a popularity contest. The words that have been chosen disappear from the language almost as quickly as they’ve appeared, while the weather remains undetermined and vague. Its a situation I refuse to accept any longer. So far, the Dutch had to get around with just four words for precipitation – regen (rain), sneeuw (snow), hagel (hail) and ijzel (glaze). Here’s my contribution to the Dutch language – new words describing wintery precipitation forms.

Its too late for this year, but perhaps one of these words will make it in 2013. I choose sneeuwgel. It’s my personal favourite. And this winter, it’s already here.